Jumping to Jap PSN, I found this game’s demo. Since I’m curious, I decided to download the demo and tried it out. Why not? It’s free anyway lol.

DISORDER 6 (D6) is a visual novel/adventure/thriller game by mages/.5pb. To tell the truth I’ve never played any of their VN, like Dunamis 15 etc. I just happened to find this and since I’m curious (I’ve watched the PV, gameplay, and followed the news), I decided to try it out.

The prologue started by our protagonist named Joe (CV. Ono Kensho), who was running with a pink haired girl named Shiina/Sheena (however you spell it, let’s stick with Shiina, CV. Hayami Saori) in a rainy night. Their hands are chained together by a handcuffs and they’re hiding from a woman and prolly polices. They are running round and round, and our fellow Joe here, seems to have lost his memories who knows where. Although they’ve been running and running all day longggggg, it seems they’re going nowhere, just to find themselves in the same place again, filled with pipes. The prologue ends with Joe strangling Shiina’s coz he can’t take all the shits happening to him anymore. He questioned who the heck is Shiina, wtf was going on, and etc etc. It seems he also got this “noisy radio sounds” inside his head, sometimes whispering things he didn’t know. Shiina said, Joe promised to be with her together, like, stay together forever?

Chapter 1 started by Joe waking up in a dark room, not knowing who he was, or where he was, or what was going on. He found his hand chained and he got really freaked out, literally. He’s all like “AHHHH WHY IS MY HAND CHAINED, SOMEONE, DON’T FRIKKING KIDDING ME, HURRY UP ANYONE THERE HELLO SOMEONEEEEEE.” just translate them into japanese or smth lol. After lots of panicking and screaming and giving up, a girl’s voice appeared and she suddenly said “JOE IS DAT U? OH IT IS JOE!” and Joe was like huh what? After all the talking (Joe hid the fact that he has amnesia and has 0 things remembered in his brain), they tried to find the lights, or at least get the room lit by smth so they can see. They slip something that smelled weird, and bumped into something. They found a lighter, and turn it on, but not good enough to light the whole thing coz it’ll just lit off again. So they found a bag and there are lots of paper in it, they decided to burn it so the fire will lighten the room. When the room is all bright, they saw a woman, stabbed in the back and bleeding.

Seeing this, of course our protagonist who can’t keep his head cool, screamed in panic. They wanted to stop the bleeding, but Joe tried to pull the knife instead lol. Only to be stopped by Shina who said if he did that, she might got hurt where they didn’t want to. Panic no 2 was caused when the fire started to rage and burn the whole warehouse. They escaped leaving the poor bleeding woman to death. 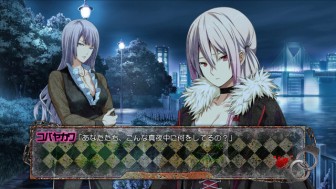 They ran into park, buying juices (coz they’re thirsty after all the escaping) with the money Shiina stole from the dead woman lol. She took the purse when she was searching the bag. Not only that, she also took a knife which once again, freaked out or little girl personified Joe. Joe is really concerned with everything, what if she killed me like that poor poor woman? He told Shiina to throw it but she didn’t want to. OK back to juice story coz it’s actually has a rather important point! When buying from the vending machine, Shiina is suddenly this little girl who kept saying “I LOVE SWEET THINGS” and sings a lu la li a lullaby while keep pushing. dat. machineeeee. Joe told her to stop, but suddenly Shiina realized and told Joe not to buy too  much drinks even if they’re thirsty. Joe said “IT’S YOUR FAULT WOMAN” but Shiina has 0 ideas what the heck you talking about yo. They met a drunkard ossan and that ossan recognized her as a daughter of something? (my japanese is limited yo) and lend her an umbrella and a LED lamp stick. Not long after that they met a woman. They asked to the woman where is the exit, until she got a phone call about a certain warehouse. This woman named Kobayakawa, is actually a detective, and just got a call about a certain murder in a warehouse. She investigated both Joe and Shiina, but Shiina turned bipolar suddenly calling Kobayakawa “fraulein” (major ace attorney flashback, ok back to story). She seemed cold and just pulled Joe running away from dat woman but she turned normal again. Meanwhile Kobayakawa called her ally and immediately send a party to chase them. Basically we got flashback from the prologue (which I skipped immediately because in the middle of the game I got sleepy and stop caring). Joe keeps getting this “radio noises” getting some flashbacks and such.

They’re back to the park, and wellll because of those juices, Shiina needed to go to toilet ww. They found one but with their hands chained, BOTH OF THEM ARE FOREVA TOGETHER NOW. Joe decided to stretched out her hand while Shiina is doing her awesome business in the toilet ( ﾟ∀ﾟ)ｱﾊﾊ八八ﾉヽﾉヽﾉヽﾉ Honestly, this is prolly the most entertaining thing in this whole game. Anyway they kept running, and found Kobayakawa again. Joe’s got more trouble that Shiina is back to her manry self! Calling Kobayakawa a baba,  hit her, and started running again. Mannn Joe got himself dragged into one heck of a mess lol. Skip til the point she strangled Shiina, the party found them and they started running again. 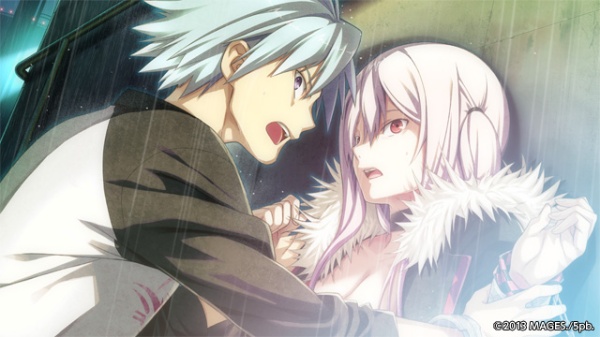 They found themselves in an old old rusty theater, which they found a foodstep. But then Kobayakawa got there, got tricked by the footsteps thinking it was them, and they got away! Then they found this twintailed loli who said she got lost. Her name is Mariwo (honestly it spelled MARIWO but heck Shiina called her MARIO, CV. Shimoda Asami). Joe said wtf yo she’s not coming wid us, but Shiina goes oh noessss she’s all alone she needs our help. Andddd Mariwo decided to tag along with them, until that drunkard ossan who helped them appeared again! Mariwo suddenly got batshit and awaken her 殺人鬼 blood and start stabbing the heck out of that drunkard, while both Joe and Shiina just Σ(||ﾟДﾟ)ﾋｨｨｨｨ 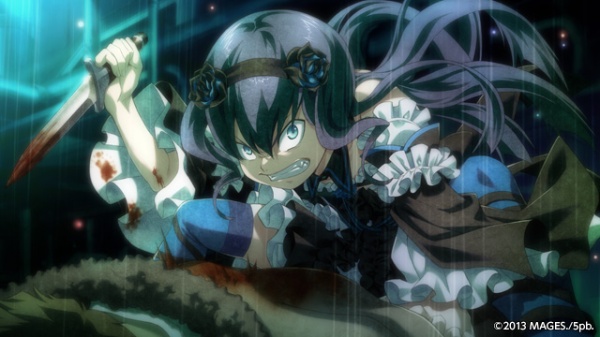 Mariwo then told them she WANTED TO KILL JOE SO BADDDD and the ossan got in her wayyyy so she couldn’t forgive him. What an assassin lol. A girl with a helmet or smt, then took her because polices heard voices from their place. Mariwo left and a guy named Date, who happened to be Kobayakawa’s ally, came. They saw the ossan bleeding there, and suspected that they were the killer. Of course he won’t believe “a moe loli just came and started to stab him and tried to kill me too!” Sincerely, Joe. So they ran away again, kudos to manry Shiina self! At this point I’m just sick of the whole point of running away and such. Well I knowwww they’re fugitives but seriously give me other plots orz. Maybe because it’s just chapter 1?

Aaaaaanyway let’s wrap this thing. They met Mariwo again after they escape, Mariwo then told them that he hated Joe so baddddd, and Shiina has multiple personalities (YEAH JOE WHY CANT YOU FIGURE IT OUT I FIGURED IT OUT THE MOMENT SHE TURNED ALL KAWAII WHEN BUYING JUICES). They ran upstairs and got cornered, and Joe just got his legs trembling. He threatened Kobayakawa that he will jump but Kobayakawa wouldn’t eat the bluff. Instead she said “Go for it young lad. Let’s see if you can jump coz that kawaii pink lady is with you.” Joe then realized Shiina is with her (how can you forget, your hand is chained with her?). Shiina then told Joe it’s gonna be awwwkay and suddenly do the kissing pose. Joe just went “KISS ON THE LIPS?!” shocked for 3 secs and accepted it anyway (lol wth?) I’m pretty sure they didn’t kiss anyway coz they JUMPED FROM THE BUILDING and only God (and the people who have played the game) knows.

The system is VN, so you just got a pile of huge massive text in front of your face. I don’t have problems with it. You can backlog it, and repeat the voices, idk about going back to certain scene though. I’m only pissed I can’t save eventho it’s a demo. I was reaaaallly sleepy when playing midgame, and I’m like can it finish asap? VN isn’t really my cup of tea, altho I do play otome games but yeah…. You only need to pick some choices but honestly I don’t know what happens if you pick other options. In VN games, it’ll be most likely affect the endings.

The characters…. idk, I don’t really like Joe. Sure his attitude is applicable in situations like those but I wished he could keep his balls calmer. Even Shiina didn’t freaked out THAT much. Shiina kinda grated me, although I love Hayami Saori voicing her. Shiina seemed yandere tho, she kinda creeped me out… When Joe said if we got caught, we’ll probably be separated, Shiina went OH NOES I DIDN’T WANT TO. And there’s the thing about being ETERNALLY TOGETHER FOREVA. But nobody beats the heck out of manry Shiina and her personality calling Kobayakawa a BBA lol. Beside those two, don’t care much about other characters, like Mariwo. She’s a loli killer and probably guys want to woo her as long as they don’t get killed. I’m neutral for other charas.

The graphics are beautiful, the scenes are good, and the mouth and eyes movement fit perfectly. The music are ok as well. I can’t comment anything about the story. Sure the mystery made me wanted to know what happened in the past, but not much? It didn’t attracted me that far. Romance is ok I guess. IDK if they’re trying to give this a fanservice, coz there’s a scene where Shiina licked Joe’s blood. And the whole kissing thing. Overall the romance blends in well for me but I guess the story just kind of forced it? Either way I don’t think I will be spending money for PS3 VN games. I prefer my RPG stuffs thank you but maybe some people wanted to try after reading this.

One thought on “First Impression : DISORDER 6”